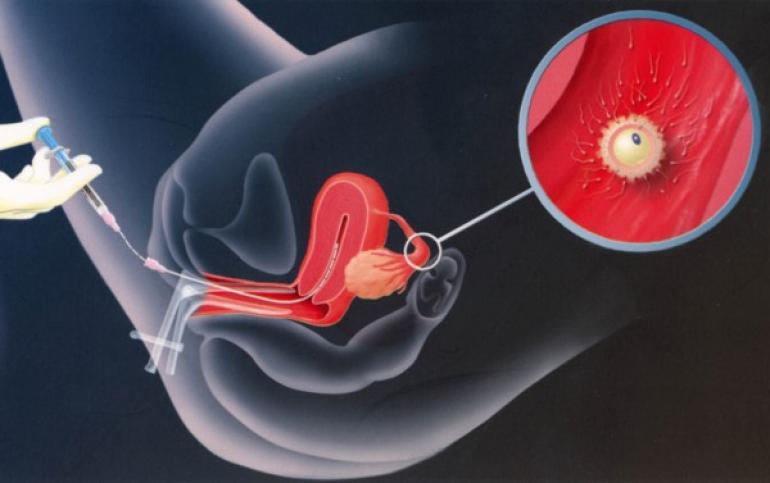 When a woman conceives naturally, sperm travel from the vagina through the cervix (narrow, lower part of the womb), into the uterus (womb), and up into one of the fallopian tubes. If sperm arrive in a tube soon after the release of the egg from the ovary (ovulation); the sperm and egg can meet and unite (fertilization) in the tube.

The cervix naturally limits the number of sperm that enter the uterus. This means that only a small percentage of the sperm in the ejaculate actually make their way into the fallopian tubes. Intrauterine insemination (IUI) is a procedure that places sperm past the cervix and in a woman’s uterus around the time of ovulation. This makes the passage to the fallopian tubes much shorter, and there is a better chance that more sperm will encounter the egg. The goal of this procedure is to improve a woman’s chance of getting pregnant.

There are many reasons why couples experience dif culty getting pregnant. IUI may be useful for some of them.

Unexplained causes. The most common use for IUI is when no cause for the infertility is found. Infertile women sometimes take medications (by mouth or as an injection) that cause their ovaries to mature several eggs at once. The goal is to increase the chance of prenangy by putting more sperm in contact wtih more eggs.

Cervical stenosis or abnormalities. IUI is helpful when a woman’s cervix has scarring that prevents the sperm from entering the uterus from the vagina. This may be seen in women who have had surgery on their cervix (cryosurgery, cone biopsy, Loop Electrosurgical Excision Procedure [LEEP], etc.). IUI can also assist when a woman has a cervix that is shaped abnormally in a way that prevents the passage of sperm.

Problems with sperm delivery. IUI can also be used for couples in which the male partner cannot become or stay erect or is not able to ejaculate effectively, or at all. For example, retrograde ejaculation is when the sperm are released backward into the bladder, instead of through the penis, at the time of male orgasm. Prior surgeries or medical conditions, such as diabetes, can cause retrograde ejaculation. Also, IUI may help if the man has an abnormal urethral opening (opening of the penis).

Lack of ovulation (anovulation). Most of the time women who do not release an egg regularly (ovulate) can become pregnant through intercourse. Sometimes, IUI may be helpful.

Fertility preservation. Men may collect and freeze (cryopreserve) their sperm for future use before having a vasectomy, testicular surgery, or radiation/chemotherapy treatment for cancer. The sperm may be thawed later and used for IUI.

Third-party reproduction. IUI is used when couples use sperm from a man who is not the woman’s partner to have a baby. This is called donor insemination (DI). DI is done when the male partner has no sperm or when the sperm quality is so low that his sperm cannot be used for conception, and in vitro fertilization is not an option. DI can also be used if the man has certain genetic diseases that he does not want to pass on to his children. Single women or lesbian couples who want to have a baby may also consider DI.

How are sperm collected?

The sperm needed for IUI can be collected in several ways. Most commonly, the man masturbates into a sterile glass or plastic cup that is provided by the doctor’s of ce or andrology laboratory, a laboratory that specializes in dealing with male health issues. Sperm can also be collected during sex in a special condom that the doctor provides. If a man has retrograde ejaculation, the sperm can be retrieved in the laboratory from urine he has collected.

Once collected, the semen sample is then “washed” in the laboratory to concentrate the sperm and remove the seminal  uid (seminal  uid can cause severe cramping in the woman). This process can take up to 2 hours to complete.

IUI is performed near the time that the woman is ovulating. The IUI procedure is relatively simple and only takes a few minutes once the semen sample is ready. The woman lies on an examining table and the clinician inserts a speculum into her vagina to see her cervix. A catheter (narrow tube) is inserted through the cervix into the uterus and the washed semen sample is slowly injected. Usually this procedure is painless, but some women have mild cramps. Some women may experience spotting for a day or two after the IUI.

The success will vary depending on the underlying cause of the infertility. IUI works best in patients with unexplained infertility, women with a cervix that limits the passage of sperm, and men who are unable to ejaculate effectively. For example, for unexplained infertilty, the pregnancy rate with IUI is double that over no treatment.

IUI does not work as well for men who produce few sperm or have slight abnormalities with their sperm and does not help women who have severe fallopian tube disease, moderate to severe endometriosis, or a history of pelvic (lower belly) infections. Other fertility treatments are better for these patients.

Overall, if inseminations are performed every month with fresh or frozen sperm, success rates can be better. The success rates depend on whether fertility medications are used, age of the woman, and infertility diagnosis, as well as other factors.

If a woman is taking fertility medications to increase the number of eggs when she has an IUI, her chance of getting pregnant with twins, triplets, or more is greater than if she were not taking fertility medications. Having an IUI does not increase the risk of birth defects. The chance of birth defects in all children is 2% to 4% whether conceived naturally or from IUI. The risk of developing an infection after an IUI is small.